On Wednesday & Thursday, August 24th & 25th, I visited Little Rock Arkansas.  I pulled into town and stopped at the Holiday Inn Presidential, in Downtown Little Rock.  I pulled the bus up to the door and went inside.  The staff was very nice and accommodating.

This is a case of rules are in place, but sometimes, just sometimes, it is better off to use common sense than follow the rules.  I gave the man working the desk my Holiday Inn Priority number as well as my credit card with my name on it.  Then he asked for a photo ID.  I pointed to my picture on the side of the bus.  There was a 8 foot tall picture ID, but he did not find that amusing and required my drivers license.

At Breakfast the next day, I asked to see the manager on duty.  I advised the lady at the front desk to ask a manager to come into the dining room and talk with me.  A few minutes later, a young man named Matt stopped at my table.  He was helpful and very professional.

Matt shared a great story with me.  When people ask me what I do, I usually tell them I am a Life Coach.  Then I often go into a short explanation, it may be everything from " helping people get more out of life" or " helping people find happiness and live their authentic life" on in this case, " I said, a little like Zig Ziglar."

What he said next really surprised me.  He said the owner of the hotel, Larry Carpenter has the original Zig Ziglar water pump in his office.  If you are a Zig Ziglar fan like myself, you understand what he is talking about.  Zig use to take a old fashion water pump on stage and pump and pump and pump, to demonstrate the work and perseverance required to get the job done, but if you give up, even for a second, you will lose the momentum you have and need to start over.

Matt checked with Larry and allowed me to broadcast my show from the presidential conference room, which made for a great recording studio.  Matt also gave me a very good suggestion.  He said that Larry asked if I had any cds I could leave so he would listen to some of my work.  I am now going to work on a sample cd for the radio show and my Life Coaching services. 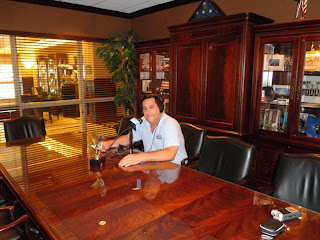 Jeff Wasserman broadcasting from the Presidential Conference Room
at the Holiday Inn Presidential in Little Rock Arkansas
﻿On Thursday, I went downtown Little Rock to visit the Riverwalk area.   I had lunch in the market and visited a few shops, but my real reason for going downtown was to find Bookends, a used bookstore run by the Little Rock library.  That was a real find, I ended up with two bags of books.  The prices are very reasonable, the selection is extensive, they even have a small coffee shop in the bookstore, but the real joy came from meeting and talking to the staff.  The ladies were friendly and very upbeat. 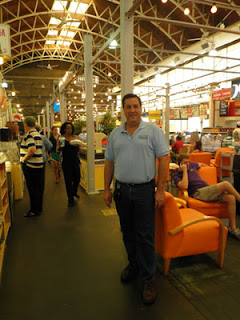 Jeff Wasserman and the Life Coach Bus will be at the LA Regional Talkers Forum.  Jeff is available for interviews and welcomes all media requests.
Posted by Unknown at 7:04 PM No comments:

Today has been a very interesting day for me.  My first stop was at Harlow's Donut shop, at exit 25 on the outskirts of Memphis.  The donut shop is part of a gas station, so I stopped to fill up the bus and ran in for a quick cup of coffee and donut to go.  For some reason, the shop had a unique look to it.  When I travel, I go out of my way to try local restaurants and businesses.  I also like to meet and help out local mom and pop businesses. 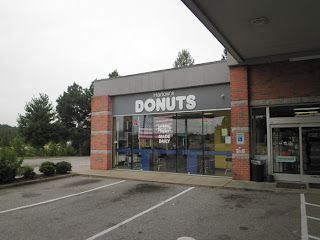 When I walked in, I did not see an employee, instead I met a customer, Jamie.  He was waiting for his sandwich and donut.  Ashley was in the back preparing his order.  Jamie was very curious about the bus, about Life Coaching and asked if I am like Tony Robbins.  I explained to Jamie what I do and how Life Coaching could change a life.
Jamie asked me to tell him how he can make a million dollars tomorrow.  I asked him if he was really asking about standard of living or asking about quality of life.  I coached Jamie for a few minutes until Ashley came out from the back with Jamie's order.
He shook my hand and said he would watch for me on TV.
I played role reversal with Ashley and I was the donut salesman for the next customer.  I had a great time at Harlow's donut shop and all the customers had a great time as well. 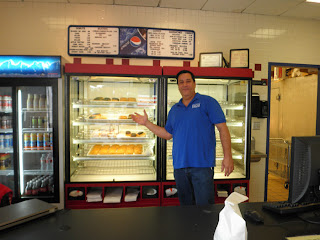 ﻿
﻿Next stop was Memphis.  I stopped in Downtown Memphis on Riverside Dr.  I set up and broadcast Life Coach Radio Show # 9.  A Memphis Police Officer pulled up and watched, he sat in his car the entire time I was broadcasting.  The bus is a real attention grabber.  People are not sure what to make of it. 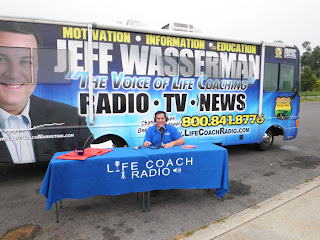 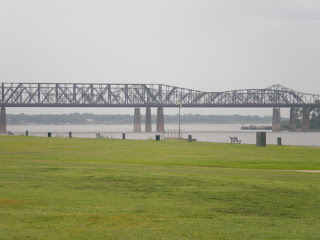 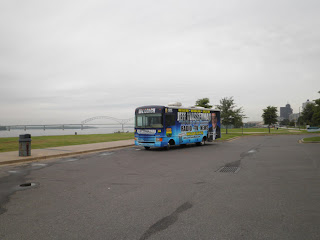 Day 2 started out in Manchester Tennessee, I needed to make a deposit at a local Suntrust.  I stopped at Suntrust in Murphysboro Tennessee.  I was thinking how times have changed.  When I was young, banks were only local or regional.  Today, I can make a deposit at a Suntrust branch in Orlando Florida or Murphysboro Tennessee and it is all online instantly.  Young people today don't understand why I even go to the bank, the next generation will do most of their banking online and seldom visit a branch bank. 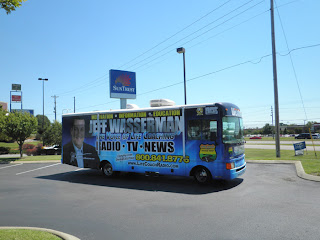 As I was walking into the branch, the lady in front of me turned around and said, "Is that you on the bus," I said "yes mam" and we walked in.  I have received so many positive, complimentary comments.   This has been a life changing experience for me.

Next stop, Brentwood Tennessee.   I stopped in at Financial Peace Plaza, home to Dave Ramsey's media empire.  Dave is a great human being and you may often hear me quote Dave or comment on his success. 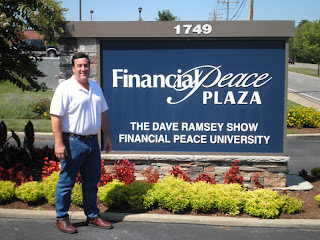 Dave's success is his legacy with the people's lives he touches, including his staff, not in dollars and sense.  Dave's media empire is faith based and built on his personal financial setback 20 years ago.  Dave started over on his dining room table and has built a staff of over 300 great Americans.  Dave built his business using many of Larry Burkett's teachings.

( a side note, Larry Burkett and I have some very unique similarities.  We both went to  High School in Central Florida, we both went to college at Rollins College, we both studied Marketing, he moved to Gainesville Ga, I move to the next town, Dahlonega Georgia.  We both wanted to take our message to the people through mass media including radio. I had the pleasure of meeting some of his family members in Gainesville Georgia before he passed away in 2003.)

I am often asked if I am building a similar business to what Dave did.  While our businesses may appear to have similarities including helping people,  we have very different focuses. Life Coach Media is not faith based or affiliated with any organization or religion.  While Dave focuses on financial freedom, Life Coaching focuses on all areas of your life, including your happiness, emotions, relationships and health.

Dave deserves a great deal of credit for hiring team members who share his visions, his philosophies and his positive energy. Matt, Dave's engineer is a young man with a knowledge of the radio business equal to most radio engineers twice his age.

A few years ago, Dave remodeled the lobby of Financial Peace Plaza and build in a small coffee shop, where he gives out free coffee and baked goodies.  This is a very nice touch, but more important is his selection for a greeter, Martha.  She shares her warmth, love for life and respect for Dave. 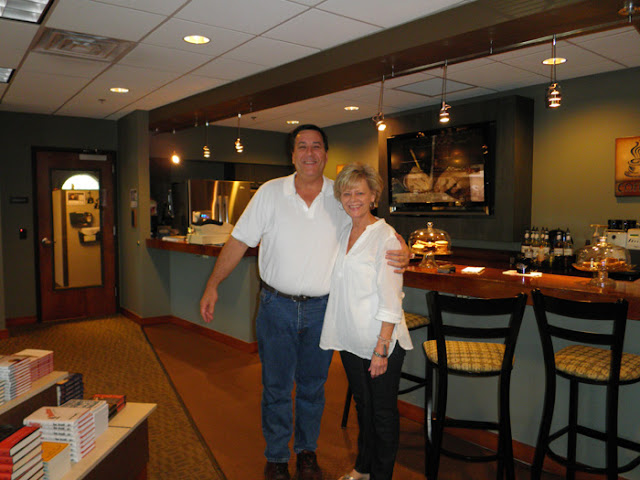 Martha and Jeff at Financial Peace Plaza in Brentwood Tennessee
Dave should be proud, she sets the tone for guests and visitors.
Posted by Unknown at 7:32 AM No comments:

Day 1 of the Life Coach Trip

On Monday, August 22nd, the Life Coach 2011-2012 Road Trip began.  I left Dahlonega Georgia and headed up I-75 towards Chattanooga.  First stop in Tennessee was Hamilton Place Mall. 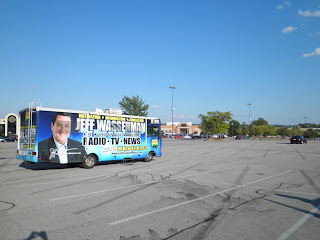 From Chattanooga, I headed west on I-24 towards Nashville. The views, the stares and the looks from travelers, was unbelievable.  I have met Life Coaches, soccer moms, business professionals, fast food workers, students, unemployed people, corporate America workers locked in their cubical jail.
Everyone I have met has been intrigued by the concept of Life Coaching, the idea and vision for the bus and my determination to drive the bus coast to coast, promoting and marketing coaching to the American public.
For all the people I have met along the way that check out this blog, thank you for taking the time to speak with me and for being so kind and sharing your kind words of support.  It has been a very emotional trip for me, since I am truly living my dream.
Posted by Unknown at 6:30 AM No comments:

The Life Coach Bus will be leaving Dahlonega Georgia on August 22nd, 2011.  The bus will travel from Georgia to Chattanooga, Tennessee, on to Nashville, Memphis and Little Rock, all the way to Las Vegas and Los Angeles.

If you see the big blue Life Coach Bus, stop and meet Jeff and pick up a free t-shirt.  We had the cutest shirts printed, with this special logo for the 2011-2012 Life Coach Road Trip. 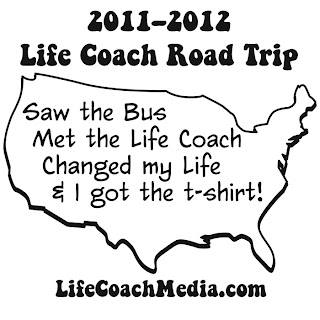 What started out as a dream or vision, has become reality.  The Life Coach Bus leaves Dahlonega Georgia on August 22nd, 2011 for a nationwide tour.  Follow along as Jeff Wasserman travels from city to city, promoting Life Coaching and his new radio show, Life Coach Radio. 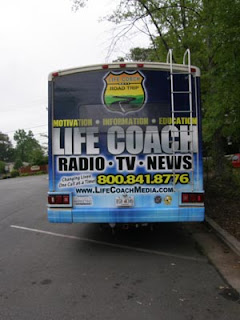 In Life Coaching, we focus on the future, not the past, we look at your visions, your goals, your dreams.  If you have ever met me or read any articles that I have written, you know that my dream is to bring Life Coaching to mainstream America.

I want to bring coaching to the people who need it the most.  I want coaching to be a household word and for people to know how coaching can change your life for the better.

For many years, I have discussed and talk about buying a bus and traveling the country promoting Life Coaching.  It is a big project, a big vision, but the time has come to bring my vision to life.

Starting later this month, the Life Coach Bus will be heading out from Dahlonega Georgia to Las Vegas Nevada.  Over 2,000 miles of open highway and not stop lights.  If only life was that easy.  We all have challenges, hurdles, obstacles and setbacks.

I plan to take highway 40 across this great land.  My goal is to end up in Las Vegas by September 21st, 2011.  There will be many Life Coaches visiting Las Vegas during the week of September 24th - 16th for the annual ICF coaching convention.

The  Life Coach Bus will then be headed to Los Angeles for a radio convention on October 20th.

If you would like to learn more about Life Coaching and meet me along the way, please follow my trip on Facebook at Facebook.com/LifeCoachMedia or email LifeCoachMedia@Gmail.com

Looking forward to hosting my Life Coach Radio Show each day along the way.  Please check out my podcast on ITunes or visit www.LifeCoachRadio.com for more information.

Jeff Wasserman
Posted by Unknown at 9:36 AM No comments: