As in most professions and industries, the major trade organizations host a years conference or trade show.  In the radio and TV business, the National Association of Broadcasters (NAB) host a large scale conference each year in Las Vegas.  In 2011, over 85,000 people attended.  These large trade shows are great for displaying new equipment and computer software.

Michael has been in the radio business for over 40 years and knows the trade better than anyone.  Michael is my inspiration for Life Coach Radio/Life Coach Media.  Hosting your own multimedia entertainment station from your own website, or as Michael calls it, the "media station."

One thing Michael Harrison offers new media pioneers like myself is chance to be recognized for our attempt to change the way media is delivered today.  Michael produces a list each year called the "Frontier Fifty", outstanding talk media webcasters.  Talkers Magazine has even changed their slogan to be "the bible of talk radio and the new talk media."

This year, on June 10th & 11th, the 14th annual New Media Seminar took place in New York City.  As I try to do each year, I attended this years event and as expected, it was outstanding.  Sometimes educational, sometimes controversial and at one point, even shocking, with the keynote address by Alex Jones.  The keynote address was advertised as "Beyond The Box" and let me tell you, it was way beyond the box, it was a 30 minute rant from the stage.

I had the pleasure of networking with several of talk radio's superstars.

Neal Boortz, is an Atlanta home town favorite.  Neal is a gentleman and a scholar.  Neal carries the nickname, the talkmaster, and he sure can talk.  He tells it like it is.  If you are into political talk radio, check out Neal's show at  http://www.boortz.com/ .  The Neal Boortz show is syndicated by Dial Global.

Sean Hannity is a true superstar.  Hosting his own radio and TV show on Fox.  Sean is a household name, especially if you are interested in the tea party.  Each year, Sean hosts a after hours party at the New Media Seminar, with ice cream, sweets and adult beverages.  If you have ever heard me speak, you know that I often comment that Sean has not forgotten what it feels like to be on the other side.  He will always stop and shake hands, visit and say hello.  Learn more about Sean Hannity at  http://www.hannity.com/  .

Stephanie Miller is a riot.  What can I say, she is a stand up comic, as well as a talk show host.  Stephanie is the life of the party and this year, she received the Judy Jarvis Memorial Award for outstanding contributions to talk radio by a women.  Stephanie's show is syndicated by Dial Global.  To learn more, visit  http://www.stephaniemiller.com/

Rusty Humphries is a unique individual.  While he recently made the new when he was held in the middle east, he impresses me the most with his unique marketing tools.  Rusty has created his own line of "beef jerky" and offers it for sale through his local Atlanta advertisers.  This is a very unique marketing concept and gives an extra value to his advertisers.  Rusty stunned the New Media Seminar when he started handing out free Rusty Humphries Beef Jerky to the 525 guests in the audience.  Visit Rusty on line at http://www.talk2rusty.com/


Doug Stephan is a staple in the industry.  Doug has been in the business for many years and he and I shared a moment together walking down memory lane.  Doug remembers the talk radio greats.  Doug and I share the same work ethics and motivation in life, we like to work and we love what we do.

Doug is a dairy farmer by trade and talk radio host for the love of talk radio.  Take a minute and visit Doug's website at http://dougstephan.com/  and be sure to go to his photo page and see Doug plowing the fields and taking care of his dairy cows.  There is no question why he calls his show, Doug Stephan's Good Day.
Posted by Unknown at 7:37 AM No comments:

Jeff's Billboard on I-75 near Adel Georgia

My goal has always been to dedicate my time to promoting Life Coaching as a profession.  I want to bring Life Coaching to those who need it the most.  In the past, Coaching has only been available to those who can pay $100 to $500 an hour.  With Life Coach Radio and the Life Coach Bus, I will be able to assist people in finding personal success, managing life changes and personal challenges.  I will be able to help callers and guests reach their personal goals.
I am promoting the Life Coaching profession and hope to build the US Life Coach Association ( USLCA.com) to become one of the biggest and best coaching associations available to all Life Coaches.
If you travel on I-75, in South Georgia, look for my new billboards and get ready for my new radio show, Life Coach Radio.
Near mile marker 37, southbound on I-75, near Adel Ga.
Jeff Wasserman's Life Coach Billboard
Posted by Unknown at 6:11 PM No comments:

Last week I was in New York for two conventions, Blogworld and the Book Expo.  For the first time, both conventions were held at the same time at the Javits Convention Center. It was an interesting convention, Book Expo is the once a year meeting of everyone in the book publishing world, from publishers, editors, established authors, new authors and those wishing to publish their first book.  It was quite a mix of people, the convention was very busy,  but the most interesting dynamic to me was the interest in my company name and badge.
Normally, I register for media trade shows with my other company name, JSW Media Inc.  I was at the Blogworld and new media convention for the Life Coach business.  As I was walking down the isles, so many authors and publishers stopped to ask what Life Coach Marketing is all about.  Most had heard of Life Coaching, but never saw a company dedicated to the profession.
One of the authors that I met brought back so many memories, it was like walking down memory lane.  Linda Evans has written a new book that will be out in print in October 2011.  It is called, Recipes For Life.  You may remember Linda from Big Valley or Dynasty, but Linda's love is the kitchen, she loves to cook. 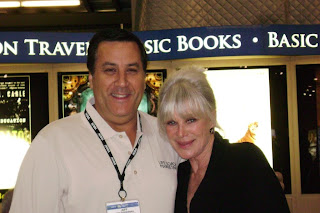 The "Life Coach" on my shirt caught her attention, but the name of her new book caught mine.  "Recipes For Life" is a metaphor I use in coaching.  People often ask me what makes a great relationship, or what makes a great career or the most often asked question, how do you build a business.  All of these require a recipe, just like in cooking.  They also require time, patience and love.
Look for Linda's new book in October is you enjoy unique cook books sprinkled with stories about Richard Burton and Lee Marvin.
Posted by Unknown at 8:42 AM No comments:

Social Media has become the talk of the trade.  The media business has gone from traditional media, to new media, then the buzz word was social media and today the talk is Social Business.
Monetization is the key to all internet traffic.  At first, the internet was mostly websites with links and banner ads.  Then Google introduced Keywords, which became the trend.  The internet was designed for easy uploading, so journaling quickly took off and evolved into blogging.  The biggest blog convention today is Blogworld, which up until this year has been held each year in Las Vegas in the fall.
This year, Blogworld has changed it's format and split into two shows, an east coast and a west coast show.  This years east coast show was held in New York at the Jacob Javits Convention Center on May 24th, 25th & 26th, 2011.  It was held in connection with Book Expo. 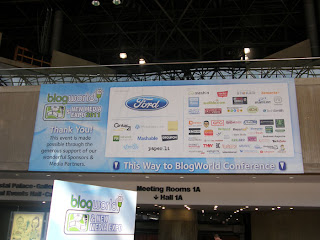 The theme at Blogworld is blogging and new media, but the emphasis seems to be on the business of blogging.  Whether you run a news site for a traditional print media or a web site for a popular radio station, having a tremendous amount of hits to your site is great, but unless you can figure out a business model to generate revenue at some point, the site becomes a burden to the business.
Social Media is great, but unless you can generate direct sales or income, social media is a hobby.  Recently Google admitted they dropped the ball by not putting up a bigger social media competition against Facebook a few years ago.  Today, Facebook and Twitter are the talk of Social Media and now Social Business.
Now that Facebook is selling ads, based on the success and usage of Facebook, it is inevitable that Facebook ads will take the wind out of Google AdWord sales.
The buzz at this years Blogworld was marketing successfully using social media sites such as YouTube, Facebook and Twitter.
Posted by Unknown at 10:30 AM No comments: